A few friends and I were hanging out in an Invite+ world and the “known admin account” Super Hornet joined the instance.

I am just curious why this happened? I understand that people know it as an admin account (whether or not it is, though it joining proves it is I think), but this totally defeats the concept of “private” instances. If someone wishes to have a private conversation of some sort, how will they know they are not having their data recorded illegally against GDPR?

i guess he was just flying-by

Moderator Admin bot it does some random stuff they do to scanning it’s so many things it.

Damn that’s scary. Imagine if you’re ERPing and then this guy shows up. Im trusting VRC to keep an instance all private for many reasons…

This Super Hornet bot, is it by VRC? If this is the case and it can go into privet worlds then this is a big problem. But as you said, it was an Invite plus.

I’ll keep my eye out for more reports of this. If the ERP community are pushed too tightly into a corner im sure alot of back lash will ensure. as of right now this is my first time hearing of it. 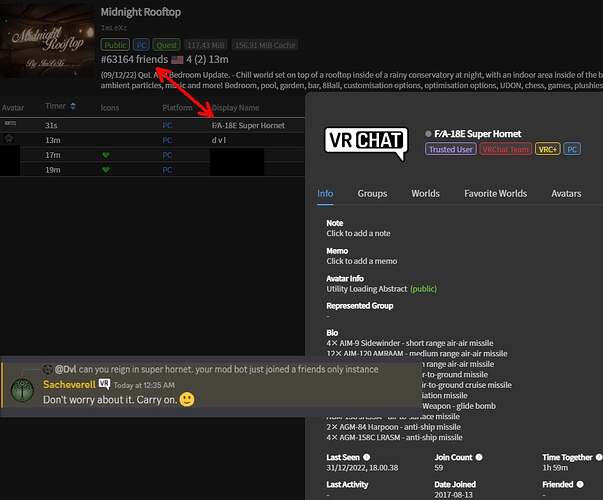 This Super Hornet bot, is it by VRC

The official story is that: Yes, it is VRChat’s official bot, and it’s mainly to collect some instance data.

Apparently it is a bot that they also use for QA testing for pre-production builds. Something about the overload of users and server instability during NYE caused it to join non-public instances.

However, as a software engineer, it is incredibly concerning if network/system instability can cause it to straight up join worlds that it was not intended to join. It seems like a huge oversight in my perspective, and it only makes me think what other oversights not only exist on the bot itself, but in the game too.

Of course, no instance is truly private since we are playing a game hosted by a company using public-facing server infrastructure. But my concern is more with the respect of privacy than the actual, true privacy. If I am in a private instance having a private conversation, I would hope that the data related to that instance is not stored in such a way that any employee can just look at voice recordings or other identifying data (if they even did that), namely in such a way that it can be used against me.

If someone submits a report from a private instance for something that breaks ToS, then sure. But there should be no reason for someone to use data outside of report scenario, in my opinion.