I need more info on F/A-18E Super Hornet. In regards to Private worlds. Thank you.

Isn’t there a thread about this already?

A few friends and I were hanging out in an Invite+ world and the “known admin account” Super Hornet joined the instance. I am just curious why this happened? I understand that people know it as an admin account (whether or not it is, though it joining proves it is I think), but this totally defeats the concept of “private” instances. If someone wishes to have a private conversation of some sort, how will they know they are not having their data recorded illegally against GDPR?

Yes @docteh that is one of the few threads, which the OP has been responding to – not sure why they felt it was necessary to start a brand new thread on this while the other one is still active?

In summary – from what I recall – the airplane-named bot checks on potentially dead or hung instances. It doesn’t record any audio visual data, simply counting active players and checking status in said map; If nobody is in the instance, or if it has crashed, then it is cleared to help free up resources. I’m just a world-maker and going off what I’ve read or others have told me. Please take it or leave it

If this is a concern, your best bet would be to open a support ticket.

I think the OP @dark may have been located in the EU, hence the reference to GDPR. GDPR, for those unfamiliar, is the General Data Protection Regulation, a EU law (or set of standard practices, more accurately) on data protection and privacy for business that operate in countries that are part of the European Union. California (USA) has a similar policy called CCPA (California Consumer Privacy Act). Our furry Cannuck friend @breaker_love would be more interested in PIPEDA, the Personal Information Protection and Electronic Documents Act, which is Canada’s similar take on GDPR.

If it’s a bot just popping in and out of a world and not creating any disturbance, I really wouldn’t mind. For me the concern would be if it were instead operated by a human, snooping in on people would be a completely different issue. Though glad to understand this isn’t the case.

I think the OP @dark may have been located in the EU, hence the reference to GDPR

I’m not in the EU, but I was on an EU instance with EU friends.

If it’s a bot just popping in and out of a world and not creating any disturbance, I really wouldn’t mind.

The concern is more: What sort of data are they collecting with or without a bot, and how are they using that data? It could be harmless, but we truly don’t know what data they collect through things like that. They do have their GDPR statement if I recall correctly, but that really only applies to PII. I am not sure if it applies to in-game data collection that is not specifically related to PII, even under GDPR. It could be a “we collect certain data for your safety” situation.

And above all: If the reason they gave was “this is a bot we use that went into non-Public instances despite being told to only go to Public instances”, then what does that say about the programming/safety of that bot, and anything else about VRChat?

Not saying there is any huge security flaw or malicious act on VRC’s part. Just saying, it doesn’t help ease suspicions or fears about privacy, that a lot of people rely on since this is one of the largest and only decently reliable social platforms where people do have private conversations and events. 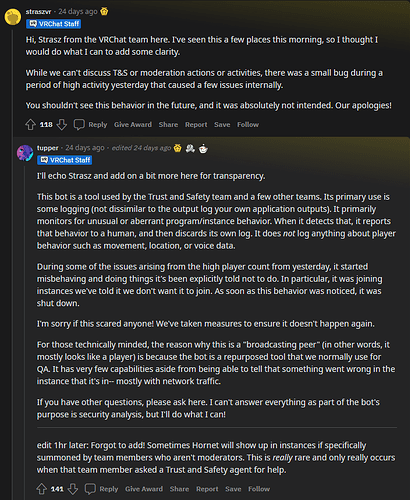 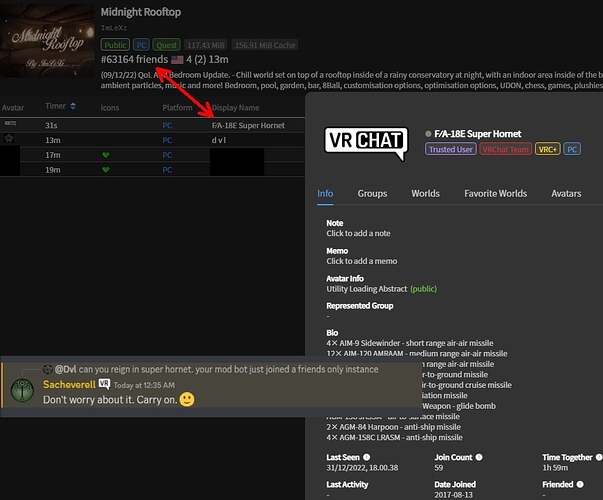 This is perfect and thank you for providing this info.