I wanted to have a recent elephant in the room addressed in a way that can safely be explained to everyone.

Groups are a great feature, and they help connect our communities together. While most of us acknowledge that VRChat is an open platform for users 13 and older, there have been niche adult circles for years.

Given that the Community Guidelines prohibits “Live-streaming, advertising or publicly sharing content that is sexually explicit in nature or simulates sex acts is not permitted.” AND “Pornography & nudity is not allowed.”, along with ToS addressing “c. your User Content…” (in this case, a group) “…could not be deemed by a reasonable person to be objectionable, profane, indecent, pornographic…”.

Using the old loading screen tip as a precedent: 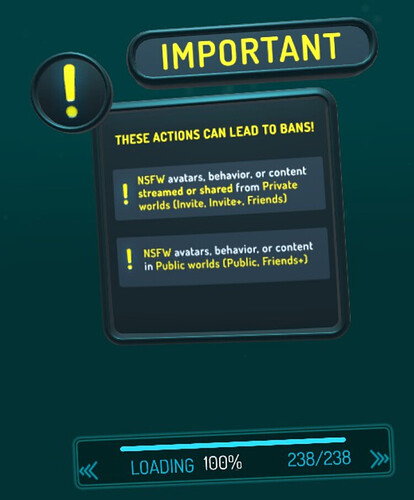 image751×907 94.8 KB
“NSFW avatars, behavior, or content in Public worlds (Public, Friends+)”, and while understandably, this loading screen tip was made over five years ago, and VRChat as a platform has changed very much since then: Group managers need to know if this precedence is still relevant. Group managers can have their group members join by private invite only from appointed group officers, and it would be irresponsible for an adult group, or fetish group be publicly open to join.

Everything feels like an uncertain gray area. I fear that my friends may get their account into trouble by creating a group that is adult in nature, but I want to know the policy on adult groups so that users can handle them responsibly and lawfully.

TL;DR These questions should be answered:

I’m going to pull out my s**thouse lawyer cap and say that the emboldened words in those disclaimers will hold your answer.

So obviously don’t go doing lewd things in public - but also don’t be broadcasting your lewdness.

So… it’s not explicitly saying DON’T do lewd things in private, just leave that stuff behind closed doors. And also obviously don’t be doing lewd things with folks who can’t legally give consent, right?

My guess though as far as Groups are concerned - you could probably word it in such a way as to insinuate that your group is NSFW but my guess would also be that, similar to the provision that thou shalt not lewd in public, having a private group that does NSFW still falls within the realm of keeping that stuff behind closed doors.

TL;DR on THAT whole thing:

This is NOT legal advice → insert cover-your-butt statement here ←