Hello! Welcome to the latest VRChat developer update for 9 August, 2022. For context, you might want to check out yesterday’s update. 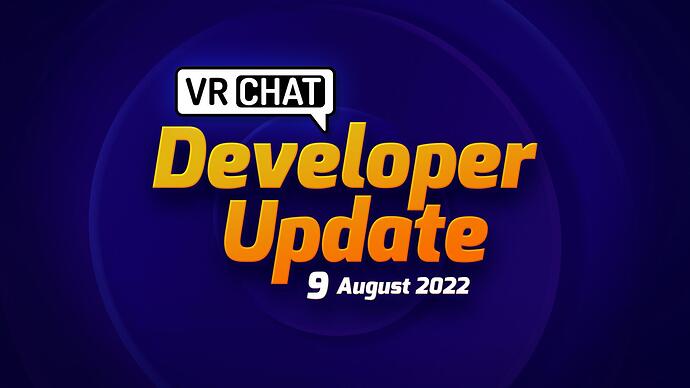 As we previously noted, we’re going to change the frequency of these posts.

Starting next week we’ll be posting these twice a week (on Tuesday and Friday) versus the daily schedule we’ve had for the past two weeks.

Eventually we’ll be working our way to doing them just one per week. Once we hit that point, we’ll stay there for the foreseeable future.

We’ve gotten requests to make it easier to calibrate full-body tracking, and to ensure your trackers are as close as possible to their paired bone and intended mount point. Here’s what we’ve come up with:

This is an optional feature you can toggle on to help out with calibrating your full-body tracking!

First off – yes, the spheres are going to have their opacity reduced. That was the first feedback we got internally! It also looks a ton better (and more transparent with both eyes) in VR – the 2D view isn’t really a great representation.

Anyways, let’s talk about what these different things represent.

The axis indicators represent trackers, and are set so you can see which axis the tracker is lined up for. We made them “spikey” so they stick out from under clothes or avatar geometry. Here’s a closer look at Kung wearing 11-point tracking.

Notice that the ends of the tracker indicators are colored to indicate which axis is which. Lighter is +XYZ, darker is -XYZ.

The red spheres are the tracked bone’s “calibration zone”. These spheres define where the tracking system looks for trackers for the bone they’ll attach to. Note that they’re not paired to avatar bones! They’re paired to a real human body’s proportions given the User Real Height you set.

The green spheres indicate the distance that the tracker is from the center of the calibration zone.

The blue lines are drawn between the tracker and the avatar bone it will control (two in the case of elbow and shoulder). These blue lines might be very long or short, depending on avatar proportions. They’re more of a pointer to what controls what.

Here’s an easy way to think about this: try to make the green spheres as small as possible! Then check that the blue lines are pointed at the bones you expect that tracker should control.

This task is in iteration.

A few more changes queued up for this! We’ve changed the icons, and the icons now fade and become transparent after about 3 seconds. The faded gesture icons remain on screen until you change the gesture, or return to neutral gesture.

The icons shown here aren’t final, we have a new version on the way with a dark outline so its more visible in bright white worlds.

This feature just needs some updated art, a final QA pass, and then it’ll get updated in the next Live Beta.

Two smaller adjustments as we’re focusing on polish for this feature:

We’ve added an “aiming laser” to the immersive movement mode:

There’s a few more items we’re looking into addressing, including the “black sphere” bug (that has to do with camera clear flags and masking settings). Despite that, we think we’re pretty close to calling Personal Mirror v1 complete.

This feature is simple – get you more favorites for Avatars, Worlds, and Friends!

Thankfully, it’s on its way out. This task finished its server-side implementation and just needs the VRChat application to be updated to handle it.

We expect to have this ready to go in the next Live Beta.

The VRChat Home website got some upgrades! A lot of them are under the hood changes and improvements that will make future development WAY easier.

The “friend location” view was updated to be far more compact and cleaner, and now has an “Invite Me” button on the page.

Also, we’ve unified the fonts across the site. I sure hope you like Noto Sans! (because we do)

There will be some more tweaking as time goes on!

How Do Earmuffs On A Cat Even Work

We got some small feedback that VRCat without a box was a little unnerving, so we put the box back on their head. And then put the earmuffs on the box.

This probably completely negates the usefulness of the earmuffs for VRCat, but they look pretty happy about it.

You might’ve noticed that sometimes we mention features in a Dev Update, but then they don’t get mentioned for a bit. This is normal!

In development, things other than creating features and writing code happen. Sometimes tasks get paused for a little while other tasks get attention, prerequisites get completed, bugs get worked around, etc etc.

Something not being in the Dev Update doesn’t mean the feature is forgotten, it just means that it hasn’t gotten to the point where we can show something new that can be summarized in a short video clip or a paragraph.

In short, these cool new features can take some time to get right. We know you want to learn everything possible about them as we move forward (and provide input, of course), so we’ll share as much as we can when we’re able.

A lot of what we’re doing is gathering and categorizing your feedback. There’s a lot of feedback that users are providing on both new and existing features, and this feedback needs to be gathered, cleaned up, merged where necessary, and then put into the production process.

This is a big task. A lot of the time we spend is on gathering your feedback and organizing it so we have that data when we need it.

That’s it for today! No established plans quite yet for timing on the next Live Beta or Release timing but we’re hoping for something later this week.

vrcat fixed! This is all I cared about, thank you.

I hope you guys find a solution for the write default problem we do have ! Thanks for all the work.

Kung’s continuous work on improving FBT and IK has been great.

another question would be if its possible to implement a setting for avatars that have to many polygons/other stuff? like how its done with the Download size setting? cuz ive seen many people getting crashed by crasher that use avatars that have millions over millions on polygons and or partical on them. and it kinda looks like they avoid the safty settings…

A lot of what we’re doing is gathering and categorizing your feedback. There’s a lot of feedback that users are providing on both new and existing features, and this feedback needs to be gathered, cleaned up, merged where necessary, and then put into the production process.

This is a big task. A lot of the time we spend is on gathering your feedback and organizing it so we have that data when we need it.

Any word if avatar/viewpoint scaling is being looked at at all? ie the old ScaleGoesbrr mod that fixed avatar scaling animations.

Thank you for the hard work on these updates!!! I only got a small taste of EAC before I went traveling, and I feel like I’ll be walking into a whole new VRChat experience when I get home next week.

The limited time I was able to spend after the EAC update was great; I didn’t crash once while in busy public lobbies. A massive improvement over what I was experiencing before. Thank you

Thank you for the hard work!

With all the improvements being done to performance (like particle limiter, avatar hiding, and FSR), will we see a fix to the Graphics Quality setting soon? The setting resets every other restart and has been like this since release.

It’s been reported in Bug Reports and has been mentioned on Discord but has never been acknowledged by any devs. It seems like this would be an extremely simple fix.

Will we be able to also move the mirror closer / further away when we are using the normal pickup mode? Or ist that exclusive to the Imersive Mode?
Either way, great news! ^^

THIS ^
It is the only thing I care about, and I have yet to hear anything about it!

I like the update, 2 update ideas I have though (The first one is what I mentioned in yesterday’s update in more detail)

If I have any more ideas I will either reply to this message or just reply to the next update post. anyway, that’s all I got, Keep it up!

Earmuff mode is a really nice touch. I love it.

Though, I suggest their should be a user indication that someone is utilizing earmuffs. What if you’re trying to grab someone’s attention at a distance but they can’t hear you cause of ear muff mode and you would feel like you’re being ignored and don’t want to approach them.

Third Person for Desktop is a feature that is being worked on, yes?

I know it has been mentioned many times now. But i think a lot of us would appreciate it if the state of viewpoint scaling with animations would be addressed in one of these dev updates,

Is it planned to make the mic icon also fade away like the other hud elements?

I mute my microphone externally so the icon on the hud constantly is more of an annoyance than useful.

It’s already really easy to check your mics status from the menu, so i dont really see the point of it being always visible.

heya i know its not on the current live or beta but you have talking about haptics ?

it will add (bhaptics tactal) and (bhaptics vest) or just the vest ? did its completly different of what i’m talking (if you add it with tactal and vest what thing will active the bhaptics points ?)

The haptics of the controler when you touch seomone
like its little bit vibrate when touch, or explosion (can be good for kat walk c2+) that its actually have integrated haptics work with controller into the game