Welcome to the Developer Update for December 8th, 2022! 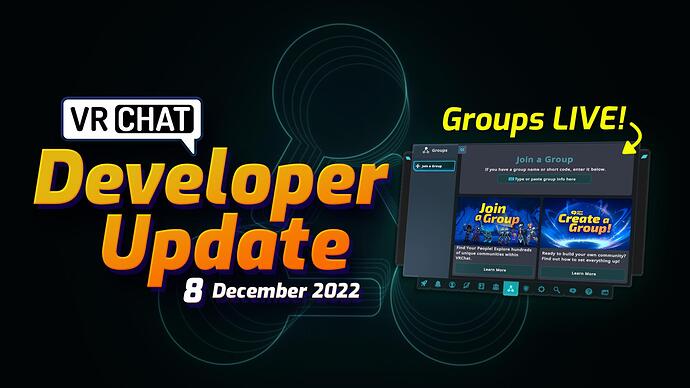 If you’d like to catch up, you can read our previous Developer Update from December 1st.

We have one more Dev Update this month, on the 15th. It might be pretty short, since we’re starting to slow things down in preparation for the holidays.

If you don’t know what Groups are, check out our latest blog post, or just watch this video Dev Update:

So far, we’ve seen people making thousands upon thousands of groups, joining groups, trying out the features, breaking stuff and just generally putting the system through its paces.

As Strasz points out in the Dev Update video, this is kind of a “preview” release of Groups. We have a LOT of plans for more features, add-ons, additions, and polish for Groups. We’re far from done.

We believe Groups is a core feature of VRChat. We think it will change the way people use the platform going forward, and our hope is that it will help both our experienced community gather and organize, while also allowing newcomers to the VRChat universe find their people in VRChat, just like all of us did too.

If you have feedback for Groups, check out our Groups feedback boards. Make sure you search to see if your idea, feedback, or bug report has already been posted!

Finally, if you still have a question about Groups after the blog and video, you can check out the VRChat Help Desk’s section on Groups!

We’ve released an in-app banner for the VRChat Creator Companion Getting Started guide! We’re doing this to get people more aware of the impending migration in January 2023.

In addition to moving our SDK management to the VCC in January 2023, SDK2 will be deprecated at the same time. SDK2 will no longer be available for download.

At a future date, SDK2 worlds and avatars will no longer be permitted for uploads. We will support existing SDK2 content within VRChat for as long as possible

The VRChat New Years world is nearly done! We should have some previews for you next week.

The form closes tomorrow, so if you’ve got something you want to submit, send it in ASAP!

We’ve added a new Curated Community Package to the Creator Companion! Gesture Manager by BlackStartx is a tool for previewing your avatar animations directly in Unity. It’s great for testing your action menu or debugging your avatar.

The VRChat Creator Companion has also been updated to version 1.0.5. Along with various bug fixes, we’ve also improved the migration screen: 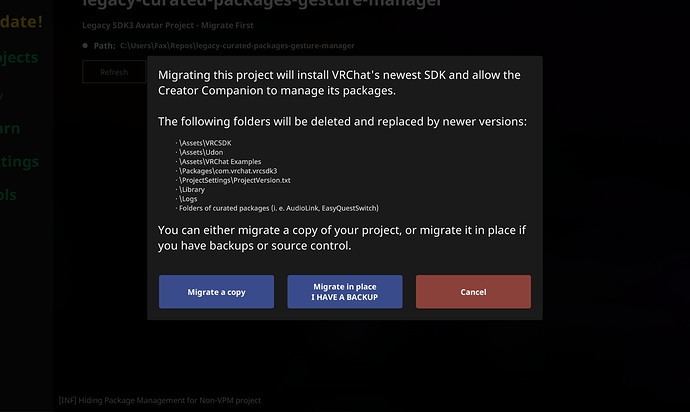 The migration screen felt like a good place to remind everyone that packages now reside in a different folder (Packages instead of Assets. Makes sense, right?)

If you previously kept your own files in one of these folders, make sure to move them elsewhere to keep them after migration.

Speaking of migration: Make sure to read UdonSharp’s migration notes if you’re using UdonSharp! The notes explain what cool new features are available in UdonSharp 1.0, and how to fix potential migration issues.

Got feedback? Let us know on this page, or leave a comment below.

Finally, SDK3 will be able to load images at runtime! We’ve got a solution that is easy to use and very configurable, works in the Editor and the Client, and includes its own separate whitelist of image hosts which don’t require untrusted URLs to be enabled. This will be one of the first new features released for the SDK next year.

That’s all for this week! As noted previously, we only have one more Dev Update this month, and then we’re done for the year. Sorry that this one was short-- we’re mostly working on Groups this week as well as getting some last-minute patches ready for release to fix issues we don’t want to leave over the holidays.

Surprised there isn’t a reminder that the deadline for the NYE video submissions was extended until tomorrow.

https://ask.vrchat.com/t/developer-update-8-december-2022/15385/3#vcc-new-community-package-gesture-manager-by-blackstartx-6 that’s pretty nice to make sure you’re all Avatar works well trying to make sure is not glitch out anyting and other things too to fix. (sorry I just don’t know how to fix this words some reason it’s not letting me to remove this double what I said.)

that’s pretty nice to make sure you’re all Avatar works well trying to make sure is not glitch out anyting and other things too to fix.
(sorry I just don’t know how to fix this words some reason it’s not letting me to remove this double what I said.)

Someone should place a 360 camera that updates every few hours with high quality images as a wildlife camera with that feature so people can go virtual bigfoot hunting.

We’re finally going to be free of hacky video player workarounds to load dynamic event posters for music worlds! Also implications for dynamic loading maps and things to use in shaders at runtime. Great addition!

Will the image downloader only fetch all images once at startup? Or will we be able to for example update the image every 2 minutes with an event?
This would allow for things like showcasing live statistics, updating banners in a club when the dj changes etc.

Definitely looking forward to more from Groups. Groups+ instances, if implemented would drastically reshape the way people move around in VRChat, in a good way. Asset sharing limited to groups can have great benefits for making the community more tidy and safer overall, as fell as being really helpful for many. Definitely interested to see what’s next, though as always, hints would be neat. So far it’s looking pretty good.

Only thing is it’d probably make more sense if people could just pick their discriminator number, rather than encouraging deleting and remaking repeatedly trying to dice-roll a clean number (vrc+).
https://feedback.vrchat.com/groups/p/let-vrc-users-choose-their-groups-discriminator

I can foresee a lot of potential for remote image fetching, i hope people actually take advantage of it and do a lot with it. Possible uses could include: ofc cleaner timetable methods, bit data via pixels, streaming texture maps, dynamic environments, and more.

I don’t like to be that karen-y person, so i’ll just say again simple: please just postpone blocking sdk2 world uploads until sdk2 content is actually unusably broken. If that was the plan all along then cool.

VRChat has a quality assurance process, so the only external information that’ll reveal if SDK2 is overly hampering development would be if they say so, barring a dev leaking videos of what they’re doing(don’t do it).

At some point they have to make a concrete decision on breaking SDK2 support.

The other side of this is user expectations. If they decided that SDK2 needed to go, and you’re in the middle of something, it would kind of annoy most people if the world/avatar never saw the light of day.

Updates vs New Stuff, issue there is that nothing stops a world from being replaced with another one.

If you change the Start event to a custom function that runs on a timer, yes.

VRChat has a quality assurance process, so the only external information that’ll reveal if SDK2 is overly hampering development would be if they say so, barring a dev leaking videos of what they’re doing(don’t do it).

At some point they have to make a concrete decision on breaking SDK2 support.

I have never said anything about supporting it, just not blocking old sdk projects from uploading after it’s depreciation. If they plan to try and retain a little longevity of old worlds for a while, then there’s no reason to deny uploads until that stops. There is no quality assurance in world creation, people upload broken stuff all the time regardless of SDK. Usually a combination of difficulty of system use and lack of user knowledge.

That said if you ask me, the destruction of old art (such as games or content in games) by the platform host should be illegal. That’s why some groups are pushing for games being preserved in playable states and such.

Was so confused about the video submission deadline, had no idea it was extended. Really pushed myself to get it done, hope it makes it. But it’ll be on my YT channel anyway.

Some things that are said about groups really clash with the notion of having creation be locked behind Plus. Again I hope you wont keep it that way, wish that was the announced plan. And I hope enough people make an effort in telling you it shouldn’t be that way. I haven’t tried any of it out yet, I love new stuff like this. Also hope I’m not being annoying with my comments…

Some things that are said about groups really clash with the notion of having creation be locked behind Plus. Again I hope you wont keep it that way, wish that was the announced plan. And I hope enough people make an effort in telling you it shouldn’t be that way. I haven’t tried any of it out yet, I love new stuff like this. Also hope I’m not being annoying with my comments…

In all other announcements about groups it mentioned that the VRC+ requirement for group creation is temporary. It is just to slow down the users a little bit. Think of it as early access to a beta feature.

But yes, this wasn’t explained too well everywhere, and people keep asking about it. I have VRC+ right now, so I can’t see what a non-VRC+ user sees on the menu, but it should probably explain it there so people that don’t read every dev-blog would know why it requires VRC+ right now and mention that it won’t forever.

I was wondering, is there is any plan to increase the update rate of Face/eye tracking over the network with OSC? I personally have been having a bit of difficulty figuring out how to setup the current community made OCSmooth workaround, and was wondering if my woes are to be soon solved in an update.

For groups, I really like how the information is being displayed. I think it adds a whole new level of color when I pop open my menu. Although, It does seem my fears were slightly true about exclusive groups. I saw someone in a VRChat dev group, and I thought, daaaarn that guy is cool… but then I had existential dread because I’m That Guy… but not that guy… I had to wander through a few worlds to reflect on who That Guy really is.

Joking aside, I’m really exited for the next visual chapter of VRChat!!

Cool with the picture feature! Any plans to be able to connect these to Group galleries and make is a slideshow?

I’m betting that day will be when VRChat gets the next Unity upgrade. The current render pipeline isn’t supported in newer versions, so that will have to change, breaking all worlds with unsupported shaders in the process (including earlier SDK3 worlds, unless updated with new shaders).

A lot of common shaders these days do support SPS-I (Single Pass Stereo Instanced), VRChat only started compiling them like, last April?