Hello! Welcome to the latest VRChat developer update for 23 August, 2022. Check out our previous update here. 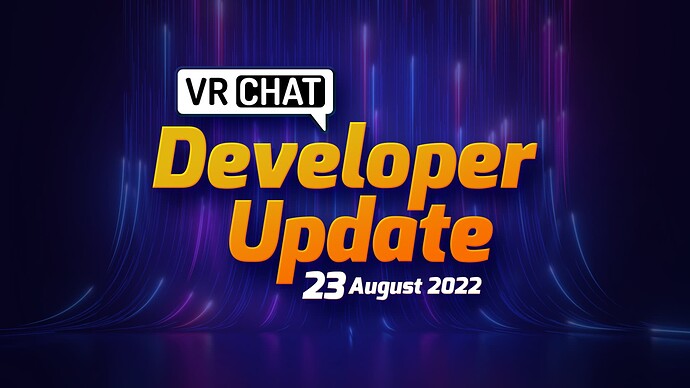 Last week, we got a new p3 beta out! It had some issues that have since been fixed (shoutout to the “demon portals”). Right now, we’re working on getting the p3 patch finalized for release. There’s a few more fixes on the way, but we’re hoping to release p3 to Live this week.

We’ve mentioned the upcoming Main Menu beta a few times in these updates, but it looks like it’ll have to get pushed a little bit due to some issues. These issues will take about one or two weeks to resolve. In other words, the Main Menu beta is delayed.

For some transparency, we’ve got some text rendering bugs that have appeared that are causing significant issues. These are important for the Main Menu to work properly, so we need to sort these out.

Additionally, a lot of the rapid feature iteration we’ve been working on has interacted with systems that the new Main Menu also interacts with. This means that merging the new features and the new Main Menu will be challenging, and may require some further work to de-tangle.

We’ll keep you up to date!

Since Main Menu is going to take a bit longer, we thought we’d give you some more peeks at it!

We’ve got to set a few ground rules, though:

So… all that being said, let’s get started! Here’s a look at how the new Worlds screen looks. There’s a lot of missing detail here, but that whole side panel of world categories is super easy to adjust on our end:

Search got an upgrade, with a whole ton of “suggested searches” to give both new and seasoned VRChat users some world-hop ideas:

… as well as faster access to saved searches (did you know you could save searches?!) in the sidebar and in the wings.

The Avatars menu also got an upgrade, with a whole bunch of options, including lots of sorting (in all categories!). There’s also different card sizes for most of these views, so you can go super info-dense or expand out the results for a comfier feel.

We’ve also got a new info delivery system called Articles, which we think will help users learn all about how to use VRChat! We’ll also be using it alongside other methods like blog posts and Dev Updates to deliver new information to users.

Paired alongside the graphical updates to the UI (and as a thanks to our continued VRChat Plus supporters), we’ve also introduced a bunch of fancy layered parallax background art for your own personal touch to your UI:

Here’s the full list of skins right now. There definitely isn’t anything else in this video…

Hopefully it is now more obvious why I’ve been dodging those requests for a Mic Icon toggle.

Aaanyhow, we’re excited to get the new Main Menu out to you! However, we want to make sure its working as best as possible when it hits Live Beta. Keep an eye on these Dev Updates to get a heads-up when the Main Menu is heading towards Beta.

Avatar Haptics allows you to interact with other users in a new way. When you bring your hand close to another avatar, your controller will give you feedback via its haptic motors. These haptics vary in strength and fire with detection sensitivity that you can define.

Importantly, this feature adheres to the Interaction Permission system, just like Avatar Dynamics. Both users must accept interaction in order for either user to get haptic feedback from interacting with each other’s avatars.

This task passed QA, and will be in an upcoming beta to try out.

This one’s been a long time coming, but we have some video to show off!

If you’re not familiar, this project is related to improving how you place a portal in the world. No more guessing if there’s a good or valid spot in your menu – you can now just move and point around to place the portal!

This feature has an implementation, but needs some more work after QA passed it back to development.

The VRChat Creator Companion is preparing for its 1.0 release. Originally announced in our Creator Toolbox Update blog post a few months ago, the “VCC” helps set up your computer for making VRChat content, create new projects, and updating existing projects to use the VCC.

The VCC is optional, but offers a much faster way to manage your projects for VRChat.

Additionally, the VRChat Creator Companion also uses a new method for managing packages that allows community package and prefab authors to allow users to cleanly and effortlessly update their packages as well as any dependencies.

The VCC is currently in Open Beta. We’re planning on announcing on Twitter and Discord with a blog post with more info once the Creator Companion releases, which should be soon!

Thanks for sticking with us for our latest Dev Update! We’re considering when we should swap to the weekly update rate instead of the current twice-weekly updates. When do you think that’d work best? We’re thinking doing one update a week on Thursdays, and probably starting that within the next few weeks. Let us know!

Thank you, and we’ll see you for our next update on Friday!

Great updates, but you forgot to change the date at the top of the article lmao

I like this update of the dev so far but always wondering if you considered adding in an avatar search into it I know it sounds odd but it’s helpful if it was there so people wouldn’t had to steal, try to mod, or other things even it might bring some people back that had mods but that’s all I’m saying…

also, will the new main menu fix the stuttering i tend to get when exiting the menu, or is that more of an issue on my end?

did we really need a new menu system?
the old one was just fine as it was
guess there are some neat features that come with it

With the implied Articles tab, I hope that the Launch Pad could be cleaned up a bit; there’s quite a few outdated articles on it. Great work, as usual.

if you read past dev updates, its not planned, but something for the future. not an important addition currently.

but on this, i think they should first add a way to whitelist avatars for friends or others, i dont like the idea of public searching currently, because some people upload public avis for their friends to clone only.

New main menu looks good and all, but I’ve been really waiting for the URL pasting thing to actually work. I try clicking on the text boxes in the video players in certain worlds and it doesn’t work. Am I doing something wrong, is it not out yet, or is it just broken? I play in VR btw if that’s something you might ask idk

You know whats kind of funny? The new menu looks vaguely similar to the large menu of CVR. Not saying it looks bad. Just looks sorta similar to me.

Do you have low vram when playing? if so that might be the culprit.

Yes, we definitely needed a new menu, the old one-three rows of miles of worlds/friends was greatly showing it age years ago

I have been reading these and I know you guys are trying to implement upscaling technologies. How about adding fixed foveated rendering as well? It was a feature in VR performance toolkit alongside the upscaling options. Unfortunately the security update meant I can no longer use that toolkit.
Reducing unnecessary pixels on the edge of the HMD needed to be rendered, especially on high resolution headsets, are really helpful to improve performance.

I dislike the new menu…It’s far to chaotic. While yes the new feature’s within the menu are okay at best - the look of it is not appealing and is far to complex. The way the old menu looked was fine, it worked and it was both simple but also complex all it needed was a bit of organization not a full new UI…I get the need for a UI update, but it didn’t need a complete over hall is which was done here.

Also please for the love of god - add something so some people can either hide the mute button if they choose while in vr, add a way to see peoples pronouns under their names and there are a bunch of other things - these are what i feel the community could use most.

Absolutely love all this! the main menu 2 looks really promising. I think can switch to weekly updates pretty soon, that’d be less work, but maybe include a little more than just dev stuff ? i’d love to see it more as a blog with devs than a pure devlog in the future, would feel more organic and help connect, especially since those are gonna be readable ingame ^^

In my opinion the menu looks betterin some ways, but i think the UX doesnt solve the main problem of “too many buttons and menus” the las video specially that extremely long list of just on and off toggles, you can compact a lot of those in buttons with a feedback, not an endless list of items.
Hope that this is not the final iteration of those.

when we are going to get the avatars search bar

Love the new menu so far, but stick drift has been a common problem for a lot of vr users. Could an option to turn off scrollable menus with the joysticks be an option?