Hello, and welcome to the Developer Update for September 8, 2022! 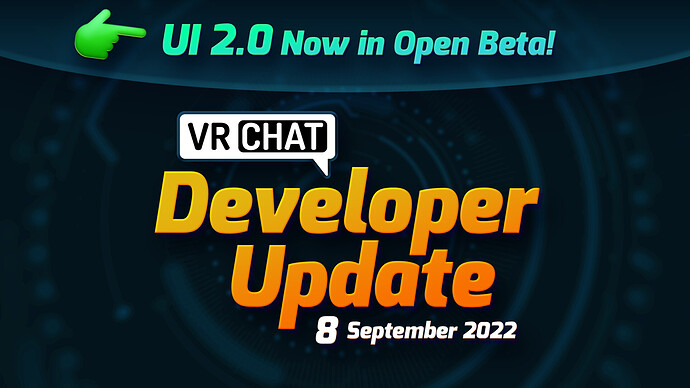 Yesterday we released a Developer Update video! Check it out below:

You can expect to see more of these in the future. They’ll come out when we feel a features is ready to be shown off to the public, likely either when an open beta is imminent, or a week or two before that.

As was mentioned in the last update, we will now only be doing these once a week moving forward.

You can expect to see a Developer Update every Thursday, unless it’s a holiday for us.

At long last, the Main Menu 2.0 Open Beta has begun! It would be an understatement to say that this has been in the works for a long time.

You can see the full patch notes here. You also should go check out the blog post for more context.

There’s also the video above, with our very own Strasz delivering an overview of the Main Menu changes!

In short, though, this update completely changes the VRChat Main Menu, HUD, and more. It also adds a bunch more features that we’ve been working on and have talked about in these Dev Updates.

We’ll be spending a lot of time over the next week or two gathering feedback, fixing bugs, and polishing it up for release as much as we can! So please, go give it a shot. If you’ve got some words to give us about it, go post them on the Feedback boards. (Also, thank you for providing feedback!)

also im adding this in literally last minute but we just pushed a live beta update with some more stuff, go check the discord okay

A ton of the features we’ve been talking are available for you to try! These features are in the Live Beta right now!!

VR Camera flight mode, which allows you to grab your camera, turn on “Flying”, and fly it around to take pictures of your whole group without having to playspace up a bunch. Also, you can drive your lens into people’s faces. Bonk bonk bonk bonk

Visual Adjustments, which enables colorblindedness filters for the WHOLE view, including the UI, as well as allowing users to adjust brightness and bloom strength. Find it in the Gear tab on the Quick Menu.

Avatar Texture VRAM usage estimation, which lists an estimate of the amount of VRAM an avatar shows. Right now it only shows in the Main Menu version, that’s a bug. It doesn’t affect perf ranks yet, but 30-40MB seems like a Good range to aim for. (I saw one with 300MB earlier today.

FBT Calibration visualization, which shows a visualization for your trackers so you can more easily diagnose issues with your FBT setup. Turn it on in the Gear tab of the Quick Menu.

Avatar Haptics, which allows you to get haptic feedback in your controllers when you touch other avatars. No avatar setup is required for this! This system uses the Avatar Dynamics interaction permission system, so both users MUST opt in before haptics will work for either of you. Turn this system on and adjust them in the Quick Menu’s Gear tab.

CPU thread affinity launch option, meant to help out certain AMD CPUs which benefit from limiting processes to a single CCX. Use the --affinity=FFFF argument to enable it, where FFFF is a bitmask indicating which threads should be utilized for VRChat. FFFF selects the first 16 threads, FF selects the first 8, and so on. This is an advanced feature. Unless you know what you’re doing and know you need this, you probably shouldn’t use it!

We also included a handful of other improvements:

There’s more on the way. We know the Main Menu is big, but there’s other stuff in there too! If you have feedback or find bugs with these features, post on the Feedback boards..

We’ve also been working on lots of updates to the VRChat Home website! You can use this site to do all sorts of useful, cool stuff if you’ve got a VRChat account. Still using a Steam or Oculus account? Merge it into a VRChat account to access these features!

In an upcoming update you’ll be able to manage your favorite lists using the VRChat Home site! 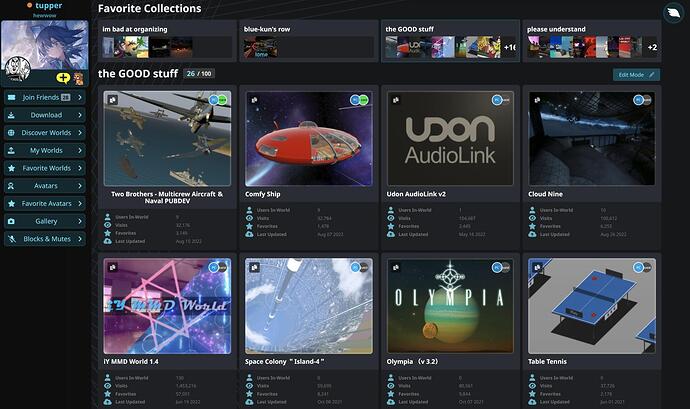 Those are worlds, but don’t worry, we covered Avatars too: 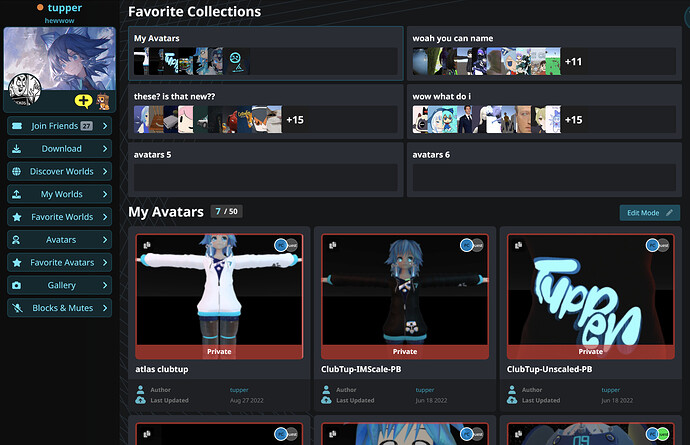 You can move stuff around, too! One at a time, or in bulk. Here’s what it looks like to move a World to another category:

Again, these changes are on the way. Not out yet, but after using them just now I sure hope they’re out soon. I’ve gotta clean these favorite lists up…

Portal Placement got finished and is in the latest Live Beta build!

When you go to drop a portal, you now just point at the floor and the portal appears there. It turns red if you can’t place it, and tells you why you can’t place it. You can move around while trying to place the portal. No more “open menu, find world, new instance, drop portal, ERROR HONK, rinse, repeat” pain.

It’ll be on by default when it launches to Live and will be the new default method of portal placement. For now, though, turn it on via the gear menu in the Quick Menu once the Live Beta is updated.

A lot of time this week is being spent on the Main Menu update! There’s a whole bunch of stuff in it, cool new features, and oh boy a bunch of bugs. We’ll be working on that. Keep reporting anything you find and give us your feedback.

That’s all for this week! See you next week, on Thursday, September 15th!

how do you know what i’ve been doing the entire time?
jokes aside, i’m glad that this stuff got out sooner than later. been waiting a while to test out the new menu!

This is pretty nice especially the new menus. but I would like avatar search since it would make getting avatars a lot easier.

Thanks for the hard work! I was really hoping to see something about World Instance History, but I can understand. Please keep this feature in mind

This is pretty nice especially the new menus. but I would like avatar search since it would make getting avatars a lot easier.

We know people want avatar search! Very very very much so. It gets mentioned in every thread. Thanks for the feedback, though. We’ll let you know when we have updates.

Oh, I’ve already seen 700MB+ ones. And I’ve heard of someone having one that was over 1GB.

Here’s to hoping my Mediums will stay Medium.

Gotta say, great work to the entire team on the new Main Menu 2.0! I’ll keep all those bug reports and feedback flowing in as I can~ ^ ^

Also finally we get portal placement!

Consider adding more HUD options, like scaling and moving of the Hud itself or the HUD elements, similar to the face mirror. With the new update the microphone icon is a bit to prominent. It’s probably fine for the Quest 2, but Headsets with higher FOV, like the Index, Pimax, Vive Pro/Pro 2, it’s kinda in the “middle”
Also a good idea: make the HUD curved, or add the option to curve it, as the face mirror looks like it is at the wrong angle if it’s off to the side, probably because it’s on a plane.

When you go to drop a portal, you now just point at the floor and the portal appears there. It turns red if you can’t place it, and tells you why you can’t place it. You can move around while trying to place the portal. No more “open menu, find world, new instance, drop portal, ERROR HONK, rinse, repeat” pain.

This has been overdue for a long time, but its nice to see it finally on its way. Thanks to the team for making VRChat a much smoother experience, and thanks for writing up all these dev diaries, Tupper!

Sad to see the other portal options wasn’t thought about for the comments. Maybe let us select the version we like as an option? Not a fan of the planet icon personally. Else, glad to see this feature in.

can we get a progress update on avatar search? because an idea to implement with avatar searching would be to restrict it to trusted VRC+ users since it would be a bad idea to just have it be free to everyone

Is the error honk going to be replaced with a more, tone appropriate, honk?

How long is it estimated until camera animations/ keyframes are a thing?

Are there still plans to add a gamma slider? It was teased multiple times but is missing from the visual options

Posted this on VRC Discord earlier so here’s some feedback and suggestion (I’ll add them to Canny too).

Love the new open beta! I’m still waiting for the camera animation feature (which you did mention previously that it may come with the final UI 2.0 update).

Pretty great keep going while you’re doing you’re a smart idea and other people give you a opinion.

This has kind of been a problem for many people where users would drive the camera up to random people and shove it in their face, which can be very annoying. I would suggest adding a camera safety settings option, where you can choose to only view only yours, friends only, or all. This is a quick solution to the drone harassment, lol.

Is there any to bulk add notes using the API? So that if for example someone had been using emmvrc to add notes pre eac they could make a tool to add all those notes?

Menu does not show in the center of my vision. This function should be called MM replacement and I have tried to turn it on and off. Am I alone?