Welcome to the Developer Update for November 10th, 2022! 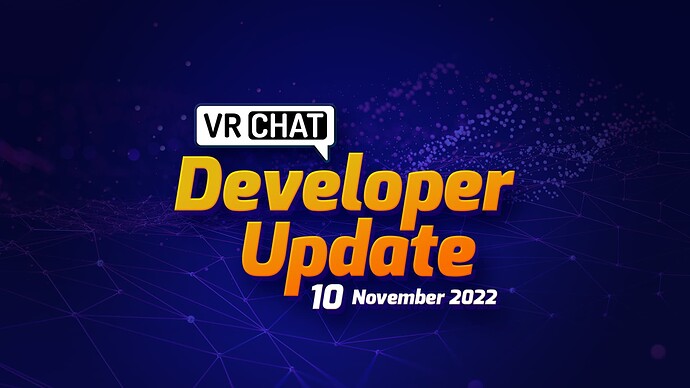 If you’d like to catch up, you can read our previous Developer Update from November 3rd.

The worlds aren’t going away, though! You can always find all the portals at the 2022 Spookality Hub.

Check them out in the menu while you can!

We’re going to be releasing an in-app banner for the VRChat Creator Companion Getting Started guide next week, to get people more aware of the impending migration in January 2023.

We’ll be updating that page with more information focusing on migration too, since most people will be migrating old projects to start.

If you’d like to read more about the VRChat Creator Companion, check the docs! You can also check out some of our previous Dev Updates where we talk about it:

In addition to moving our SDK management to the VCC in January 2023, SDK2 will be deprecated at the same time. The SDK will no longer be available for download.

On a future date, SDK2 worlds and avatars will no longer be permitted for uploads. We will support existing SDK2 content within VRChat for as long as possible.

We talked a bit about this last week! Here’s some updates.

We’re in the middle of inviting people to create Posters, Food Trucks, and Storefronts to fill out the NYE 2023 world. We’re adding some additional stuff to the New Years world (one of which we preview below, in ongoing development) but for now we’re keeping some of it a secret.

Because these slots are so limited, we wanted another way so EVERYONE gets a chance to participate in the New Years event. So, this year, we’ve introduced something new: 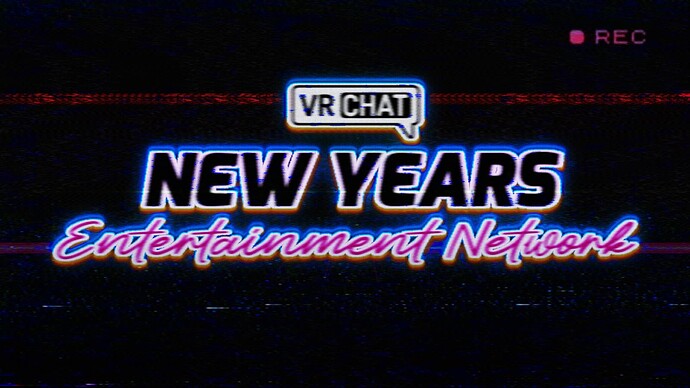 The VRChat Entertainment Network is a 26-hour long video stream we’ll be running! You can contribute video for us to play during the stream!

Check out this post to learn more. You can make a video and submit it right now! The deadline is listed on that page.

Today, we released a VRChat patch! It includes a bunch of fixes we wanted to get out before the weekend.

It also includes a few smaller features, like new IK options and the ability to rename avatar favorite lists within the VRChat application!

I don’t have much to show here, but Groups is a BIG focus for us right now. We’re pushing hard to have a version to release for this year, so the community can try out the initial release over the holidays.

Recently, we added a bunch of new Udon hooks to access the VRCGraphics class of functions. However, we’re not done just yet!

Efforts are currently underway to add temporary RenderTextures to Udon, as well as constructors for RenderTexture, Texture2D, Texture3D, and Sprite.

The New Years world is getting some cool and fun gimmicks to try out!

First off, these features aren’t currently planned for exposure to users, but honestly I don’t see any reason why they wouldn’t eventually be.

Here, we use a Cinemachine Clearshot system to automatically switch between cameras, which starts and stops video capture based on trigger areas and saves a video that can be reviewed without even leaving VRChat-- on a Quest 2! To reiterate, this recording is done without external software or platform APIs, and is started and stopped via Udon controls.

We’ve also included just the screen recording video captured natively on the Quest 2, just to show how it looks.

Lots of work on the Creator Companion’s UX upgrade!!

We’re working hard on getting this UX upgrade ready as soon as possible. No ETA yet!

As noted at the end of the previous thread, we’re delaying our planned continuation of our toxicity discussion until a later date. We’ll let you know!

That’s all for this week! Sorry if it’s sparse. Groups is where we’re spending a ton of our current efforts!

Make sure you check out the Spookality worlds before the world category disappears on the 14th, and start throwing together some videos for the VRChat Entertainment Network!

Thank you, and we’ll talk to you next time.

We’re in the middle of inviting people to create Posters, Food Trucks, and Storefronts to fill out the NYE 2023 world.

This should be an application, not dev friends like last year

It is not “dev friends”. Please do not spread that kind of hokum.

My team, our internal analytics team, and I personally spent quite a lot of time looking into the users who have made “an impact” at VRChat this past year. This could be via content creation, running communities, running events, creating worlds, creating avatars, creating VRChat tools, streaming VRChat, creating TikToks or YouTube shorts, or any number of other things.

“Impact”, of course, is hard to measure. So we do the best we can. We pull from a lot of sources (not just internal) and aggregate that data. From there, we contact who we can, and offer the opportunity.

The spots for in-world content are necessarily EXTREMELY limited. People are going to feel left out, even if we choose perfectly. That’s why we implemented the Entertainment Network this year.

Part of what we do on the Community team is keep track of those people as best we can. We try to talk to them, see what they’re talking about, listen closely, keep an ear to the ground. That kind of thing. (Among the many other things Community team does!!)

So, I can see why you might think what you’ve said is the case. However, my team and I have spent a large amount of time to ensure the selection was objective as possible while remaining reasonable for us to deal with.

It is not “dev friends”. Please do not spread that kind of hokum.

its more of from last year which has old worlds and closed groups featured in the world.

so in the future will come out new future camera to record different ways other tools video animations you know the Silly Ways And Creator Companion UX Update Progress pretty nice.

On the topic of Holiday events, is there any word on when the Spookality 2022 winners will be announced?

On the topic of Holiday events, is there any word on when the Spookality 2022 winners will be announced?

This year was a jam, not a contest! There’s no winners. Well. Everyone’s a winner. Wait, no, I’m getting elementary school football flashbacks.

Is there a permission for this to limit which worlds can trigger this?

Zero technical details have been released. Everything I tell you about it will be assumptions.

That being said, I assume that function is enforced local-only.

Speaking of camera improvements, would it be possible for the local photo/stream camera to not stutter when in a moving seat? (As in one of those Jets in Test Pilots or other VRC Aviation worlds, the local camera often stutters while moving, like how the smooth camera stuttered before that was patched a while ago. and simply using the “smoothed” option in behavior makes the camera lag behind.)

Where did you get that from?

Are you going to use a new map or the one from last year? i would like to see a return to the old new year map or similar in size if possible to avoiding last year new year world type of visual cluttering because of small size.

what do you mean? I’m kind of confused.

So we will be able record video with the camera in anywhere? Or it will be only a udon feature?

So we will be able record video with the camera in anywhere? Or it will be only a udon feature?

Looks like world only, and the world has to build it in. Not sure why this was done before player side recording

Any updates on avatar or viewball scaling?

so so happy to see SDK2 finally being entirely deprecated!!!