World Update trying to upload as an New Avatar

I made my homeworld on October 22nd. I added some changes and uploaded an update on the 23rd. Closed Unity and the Creator Companion, tried out the world live in VRChat. Didn’t like the hit to performance, so I opened Unity again, removed a few things, and attempted to upload the new update. The VRChat SDK window doesn’t recognize it as a previously uploaded world. The world builds and tests correctly. But when attempting to build and upload, it attempts to upload as a brand new avatar. The project files have never had the avatar SDK in them, or anything even resembling an avatar. I didn’t remove or change any files in the project beyond deleting some grass from the terrain. I don’t want to spend hours remaking the same world, and I don’t know how to proceed with troubleshooting. Is there a way to force the project to recognize that this is in fact a world and not an avatar?

Do you have an avatar descriptor anywhere in the scene?

Is your SDK completely up to date?

There is no avatar descriptor in the scene.

Thanks for the quick response!

Can you post the relevant bits of the console when you try to upload? How can you tell its trying to upload as an avatar?

Previous attempts to upload the world resulted in this: 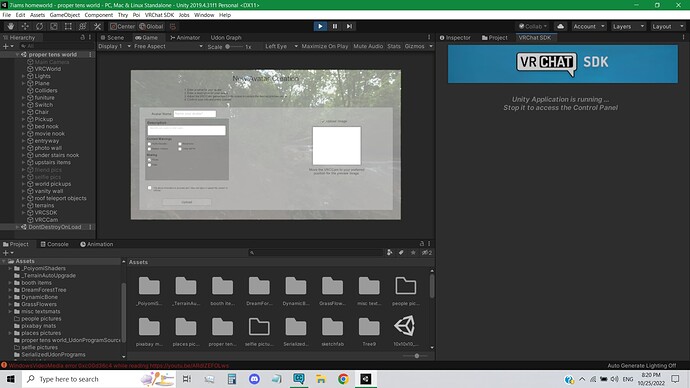 However, now nothing happens and the console returns

That screen doesn’t exist in the world SDK.

I’ve crawled through every bit of every prefab/asset that I used in the project and as far as I can tell, none of them have anything even close to an avatar descriptor. I checked the folder in the export exception and (as expected) it doesn’t have that file described as missing. I checked my recycle bin in case that file ended up there somehow, but it didn’t.

I’m just at a complete loss as to what could have messed up my project so badly in just about 20 minutes or less, with no added or deleted assets.