Im wondering if there is ever going to be an update for the quest cameras so us quest users can use it to record videos as well like pc users can. I think it would be really useful!

Now developers are solving a lot of tasks related to the camera, but I have not heard about the video camera for Quest 2. Given that the native video resolution is 1024 in square ratio, the quest is quite capable of recording video in 720p. The best way to get the idea to the developers is to write in their feedback site, I already found an existing one here so you can join in and vote for it, i will upvote too 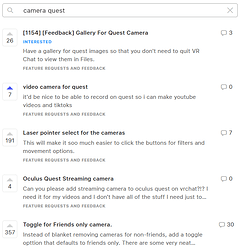