Are there still people who have always liked to go out to public instances and not just friend+? Has anyone noticed that wherever you go 90% of the people around you are kids? I get the feeling I’m getting too old for vrchat. Maybe I don’t understand something andshould take it as normal. Now adults need to look for groups and events if they don’t like it and forget about publics? Keep in mind that I don’t touch on the subject of their behavior. Sometimes I meet polite kids, but even if they were all like that, being among them or communicating feels strange, which is why most of the time I stay quiet and just play games or something. And I think if I am not the only one, how will adults find each other in the worlds? Do you think we can do something about it or should we accepthe change? 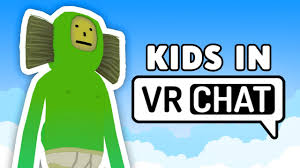 That’s an interesting observation. I don’t think you’re ‘too old’ for VR Chat - hell, I’m … old… too. But I concur about there being very young folk who tend to populate the public worlds.

I tend to stick with friends that I know IRL or though Discord communities and we do our own things, but maybe this little piece of advice will help:

Whenever you go into a public world, think of it like you’re going to the town carnival. There will be a lot of folks, a lot of kids - some of them unsupervised and running amok - but at the end of the day, you’ll likely NEVER see any of these people again in your life. But you also might find some folks you can really get down with and enjoy their company.

Trust me - I know that feeling that crawls up your guts and lodges itself in your craw whenever you hear that child start speaking. But take heart! Unlike the carnival where the kids will bump into you and spill your beer, in VR Chat you can block them and never have to hear their cracking little voices or see their NSFW avatars again.

Like Falconi said, you approach it like you would in real life at a public place. Mixed age groups running amok. You just gotta keep on going and you’ll eventually find people more your age. I myself am almost 32, but I’ve found so many adults, and even many around my age. I’m even good friends with someone who’s 64! Really cool guy, love talking and hanging around him.

However, now with groups, it should soon be a bit easier to join adult related groups, thus surrounding yourself with only adults more easily, ideally.

Unfortunately, since there’s not a system in place that lets us filter people by age, this is just the way we have to go about it. Just hang in there, and keep on keepin’ on, you’ll find people you like.

I seem to find that certain worlds are far more likely to be filled with kids than others. Places like The Black Cat, Murder 4, Prison Escape, etc tend to see lots of younger kids because that’s the first place they usually see when opening the game (maybe I’m wrong, just my thought). I run into way less kids in places like Great Pug or MEROOM since they aren’t quest (sorry) and are, relatively, a bit less popular. I tend to find the most interesting and fun to talk to people in the more niche worlds. I’ve made several friends in gaia night and that place is way past it’s prime as a popular world XD. Anyway, my recommendation for a better public world experience is to try out the smaller instances or less popular worlds! Never know who you might meet☺️.