Why is this avatar clipping through the ground?

Hello! I’m creating a VRC avatar with custom animations for the first time.

I’ve created three animations: “Walk”, “Run”, and “Idle”. I’ve edited the “vrc_StandingLocomotion” blend tree to replace the default animations with my own: 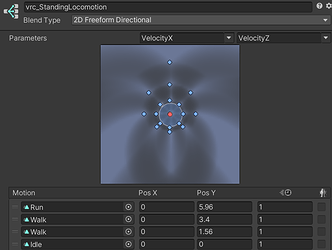 However, the avatar appears to be “crouching” and clipping through the ground. On top of this, only the avatar’s tail moves:

The built-in animations, such as “proxy_run_strafe_right”, seem to work just fine, save for the fact that the limbs aren’t moving:

Does anyone know what I’m doing wrong? You can find the project files here!

Your animations are not humanoid.

I set the animation type to “Humanoid”, are there any other quotas the animations need to meet in order to work?

That weird little bunny-hop pose is the default value for bones in Unity when there’s nothing animating them. Your animation only seems to be affecting the tail wagging.

If done properly on the right layer, it’s fine. If you’re seeing this in-game after uploading though, you probably have it on the wrong animation layer.

In the Avatars 3.0 Avatar Descriptor, there are five buttons labeled: BaseAdditiveGestureActionFX These are Playable Layers. Each of them takes a Unity Animator, and they layer on top of each other. In other words, you've got five root animators to...

Also the proxy_ animations are not actual animations - they’re just the first frame of an animation that gets overridden by the VRC Default animation by the same name. (So if you have proxy_run added, that gets replaced by VRC’s default run animation).