ProTV is a pay-what-you-want asset that intends to make working with video players a more enjoyable experience by enabling extensibility through event driven activity.

What is ProTV exactly?

At its core, ProTV is a central management script that brokers the state and activity of video players that are connected to it. It is capable of handling multiple video players by swapping between them and retaining proper sync to other users while doing so. Based on the state and activity of the management script, it will propagate events and data to other udon scripts that have registered themselves as a listener.

Where can I get it?

Monetary support for the project also accepted on Ko-Fi

If you are looking for an out-of-the-box solution that doesn’t take much if any effort to add to your world, check out the Assets/ArchiTechAnon/ProTV/Prefabs folder after importing. This is a selection of TVs that should #justwork. They also support multiple independent copies[1] in-world, no problem. Though if you want something a bit more custom, please continue reading though the guides to get a full grasp of how the ProTV system is setup.

[1] Note: do be aware that in excess of 8 ProTV instances in a world, some performance loss may become apparent during simultaneous use.

How does it work?

The primary driver behind this asset is the TVManagerV2.cs script (aka “main script”). When the developer is setting up the world with a new TV, they will need to first declare what video players the main script will manage. This is done by attaching either a Unity Player or AVPro Video Player script into the scene and adding the VideoManagerV2.cs script to that same game object. Then drag the game object to the Video Players array of the TVManagerV2 script inspector. Repeat until the desired video players are connected. This is the fundamental setup.

With this completed, the main script will now broker state and activity between the connected video players and any udon behavior that declares itself a listener to the main script.

How can I customize it for my needs?

There are quite a number of ways that you can customize ProTV for various situations. The two most meaningful ways to customize are related to the Speakers (audio sources[2]) / Screens (mesh w/ shader) as well as various Plugins that are either provided in the asset or that you can make yourself (more on plugins in a bit).

[2] If you are wanting to customize the audio sources a lot, I highly recommend you have a look at TEXTLOGO’s Audio Demo World for ideas and general setup for certain audio considerations and situations.

The architecture of ProTV has two main concepts.

In order to give developers freedom over what player configuration they wish to use, ProTV implements a proxy-ish script that sits on the same game object as the desired video player component (being either Unity player or AVPro player). This script is called VideoManagerV2.

Each video manager has a handful of configuration options available to it. It also has two lists that should be populated as needed: Speakers and Screens.
These lists associate any Audio Source and Mesh Renderer game objects to the script for automatic management.

These proxies are then also associated with the main script called TVManagerV2. The tv manager has a handful of config options as well for the overall operation of its particular instance of ProTV.

In order to better facilitate extensibility for this asset, ProTV implements a behavior subscription structure where any Udon script can register itself to the TV and will receive specific events and data based on the TV’s activity.

These events are a bit more granular than the standard udon events for video players (though ProTV does emulate those). It is recommended to be judicious when deciding what event to listen with.

image1873×632 99.7 KB
The variable and event names are a bit long for the input field in the node, so the full string is commented below the nodes.

Once this is done, your script will begin to receive events from the TV. You can also run this logic at any point in the runtime (not just in the Start event, though that is the most common use case) and it will register to the TV correctly.

There are various types of events available for different contexts. All events called from the TV script begin with the _Tv prefix to avoid event naming collision with other script usages.

Based on TV Activity

Based on Change to a TV Setting

Dynamic list of videos that players can add to in-game.

A script and modified shader that enables 360 equirectangular (aka panoramic) video to be easily rendered as the skybox of the scene. 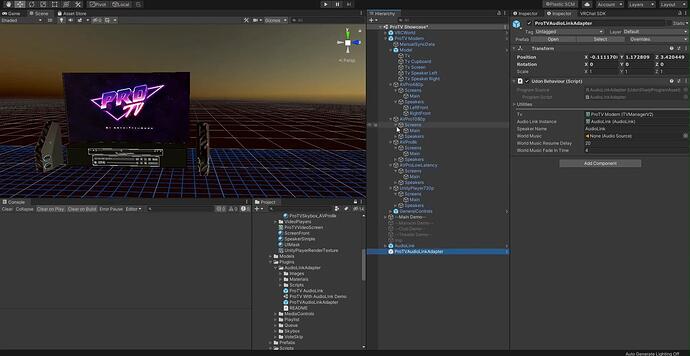 What sort of streaming works best to quest users? I’ve heard of things like HLS, RTMP, and http streaming, the last one when you connect you just get the data (shoutcast?)

I tried topazchat out once in a world with a different player, not sure what protocol it uses, but apparently on quest it kept giving up. Hoping for something that can retry when needed, or just keep working…

Generally speaking, the recommendation is the MPEG-TS protocol for Quest.
You’ll typically see the URL end in something like .ts.