I tried looking around and haven’t seen anyone else with this issue. I just made my first avatar and it mostly works but most of the hand gestures aren’t working. The open hand gestures, right hand point, both rock and rolls are all fine, but everything else looks like a variation of the idle hand pose. If I try to do the ones that don’t work, I can see the hand moving only a little bit. All of the gestures change the facial expressions correctly though.
Since I’m totally new to unity and making avatars, I don’t even know where to start with fixing this.
Edit: here’s an example of the point gesture. I used desktop because I didn’t want to get the headset back out but it seemed to be the same. 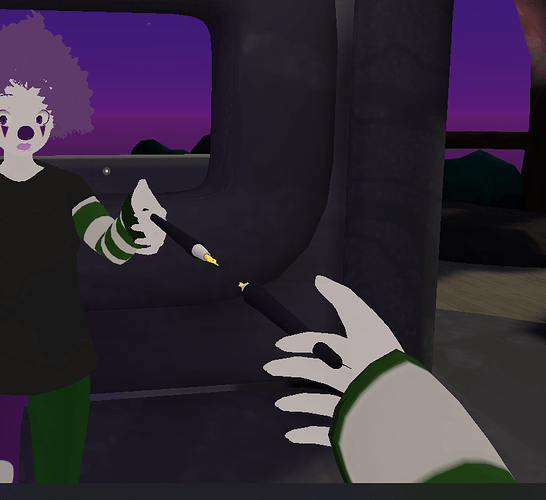 I don’t know how to do that even after googling. Unless you mean this in which case removing it didn’t change anything

Thank you for your help. I think I understand everything up until you say to duplicate my animation and adjust them. You mean duplicate the ones that are changing the expressions so I’ll have a second one for the hands? Also I can’t figure out how to adjust the hand animations. I can adjust the expressions in the blendshapes part, but I can’t find anything for the hands. I’m also still not quite sure what a “controller” is in this context.

Here I videoed the process what I mean

Ok thanks a bunch. I will try that tomorrow morning. Google drive took awhile before it let me watch the video

I feel like I did everything right but it’s not showing up in game.

I also remembered the test build of the older version of the avatar without expressions was still in the game so I tried it and the hands worked perfectly with that so I don’t know what happened along the way to making the expressions that caused the hands to mess up like this.

Yeah so I can put a controller in the FX layer but as soon as I add an expression animation to a gesture, that’s when that hand gesture stops working. And putting an animation in the gestures layer does nothing at all for some reason. I don’t understand why this is happening or why it wasn’t a problem for anyone else following that video tutorial

ok update: I seem to have fixed it by following a different tutorial for expressions. vrchat gestures not working when adding expressions - Google Search
Thanks for your time, guys